ORIGIN OF LIFE by Eric Blievernicht

It is the sheer universality of perfection, the fact that everywhere we look, to whatever depth we look, we find an elegance and ingenuity of an absolutely transcending quality, which so mitigates against the idea of chance. Is it really credible that random processes could have constructed a reality, the smallest elements of which – a functional protein or gene – is complex beyond our own creative capacities, a reality which is the very antithesis of chance, which excels in every sense anything produced by the intelligence of man? (Agnostic non-creationist, Dr. Michael Denton)

Have scientists created life from non-life? Have they come even close? Do they have a reasonable model, or a strategy for developing a reasonable model explaining how life could develop without an intelligent designer?

From Little Blobs to Worlds of Hypertechnology

In Darwin’s time microscopes were not very powerful. Scientists had learned that all life is divided into cells but knew little about the interior of cells. They seemed to be little more than little blobs of protoplasm with little specks in them, such as the nucleus. It was thought by some (despite Louis Pasteurs’ famous experiments demonstrating life only came from life) that such blobs could easily form by random chance from non-living particles, under the right conditions.

This led to serious blunders, such as Bathybius haeckelii. This “primitive life,” named by Thomas Huxley after the deceitful professor who invented the fraudulent gill-slits-in-human-embryos claim, was composed of oily blobs that formed when alcohol was added to deep sea ooze. It was many years before it was admitted these blobs were just that, inorganic precipitates, and not life at all! (Taylor)

By the 1920s understanding of the major components of cells was deepening, and Darwinian theories were developing. A Soviet scientist named Oparin sketched out the notion of a “biochemical soup” that existed on the early earth, proposing that a thick concentration of organic molecules (the building blocks of life) formed naturally. From this, it was reasoned, it would be only natural to expect the formation of the first cells.

But troubles mounted. By the 1940s research in biochemistry was proving that biological molecules were vastly more complex than once suspected. French scientist Lecomte Du Nouy observed that the formation of even one protein by random chance in the history of earth was impossibly small. (Coppedge) Advances in biochemistry, the discovery of DNA, and continuing research into the complexities of the cell continued to make the “life by random chance” view increasingly dubious. Life came to be recognized as a marvel of hypertechnology, a nano-world of machines and processes, efficiency and integration advanced beyond mankinds’ imagination. (Denton)

By the 1960s Darwinian fundamentalism was in crisis. In 1967 an assembly of evolutionary biologists were joined by mathematicians at the Wistar Symposium, in an attempt to resolve the issue of how life could arise without intelligent design. The meeting was frustrating. The mathematicians, all evolutionists themselves, complained that they wanted to help, but the biologists weren’t giving them anything to work with. Random chance was just not plausible. The meeting ended without a resolution in sight.

The following year a young biophysicist, Dr. Dean Kenyon, proposed a new approach that seemed to offer new hope. If life was not the product of random chance, he reasoned, then it was the natural expression of the laws of nature operating in the universe. Not an intelligent designer, nor chance, but the inevitable result of the order of nature, just as natural forces create orderly patterns in layers of rock or in crystals, was responsible for life. He called this approach biochemical predestination – that is, the chemicals of life were “predestined” to appear by the laws of nature, and thus life was the result of natural order, not chance. (Kenyon & Steinman)

Kenyons’ proposal still remains as the foundation of modern research in abiogenesis. The random chance idea is recognized to be even more unlikely than ever before as we learn ever more about life. But biochemical predestination is not tenable. Despite its position as a keystone of Darwinian fundamentalism it was refuted only a year after it was published, by the creationary scientist Dr. A.E. Wilder-Smith. (Wilder-Smith) Kenyon later cited Wilder-Smiths’ critique as a factor in his own conversion to the young-earth creation position.

Wilder-Smith pointed out that the universe does produce order, but order is not the issue. The issue is complexity. The order of life is complex. The order produced by nature – such as the repeating patterns of crystals, is not. In fact, precisely because the universe follows laws and drives matter to behave according to orderly patterns it is impossible to justify the spontaneous formation of life without intelligent design.

For example, consider a room of monkeys working at simplified typewriters. The goal is to get them to type the phrase “TOBEORNOTTOBE.” As long as the monkeys type randomly they have a small chance of typing the required phrase. It’s a lousy chance, but at least it’s a chance.

Now consider that all the monkeys don’t really type randomly. Instead they follow patterns of behavior, akin to the laws creating order in the universe. For example, one monkey always types each key twice (KKDDIIDDMMAA, etc.). Another always types a “H” immediately after typing a “T” (THCJDSKKTHCSTHLA, etc.). A third types letters in left-to-right rows along the keyboard (QWERTYCVBNMASDF…) What are the odds of each of these orderly monkeys ever typing the required phrase?

The answer is zero. The random-typing monkeys have a better chance. That’s because if the patterns of order in the source material do not precisely match the patterns required to produce the requisite order, the orderly behavior will actually get in the way and work against attempts to produce the sought-after effect. For something as complex as life, extremely complex patterns of order are required as inputs to achieve the complex, ordered results. Only intelligence produces anything like this required specificity. Indeed, our own intelligence is lacking when it is compared to the complex order found in life, forcing us to postulate a super-intelligence able to generate the patterns of order far more complex than our own.

That doesn’t mean Darwinian fundamentalists have given up. Instead they are working to mimic the required complex specificity in nature by postulating an increasingly complicated series of events that would lead to life. It’s as if, admitting that a car can’t form by chance, they are now theorizing that a robotic, automated car factory “just happened” to exist once in the past, such that a car would be the natural and expected result. But even if they do someday assemble a model for the origin of life that leads reasonably to the production of a cell, will they really have explained what once happened? Insightful critics will point out that in their carefully constructed, extraordinarily complex scenario, they will have postulated something that is even more complex, and even more unlikely, than the random formation of a living cell.

Chirality: Organic molecules can form in both “right-handed” and “left-handed” mirror eImages. All amino acids are composed of “left-hand” oriented molecules, while all sugars are “right-handed.” How could random molecules in a biological soup have filtered and sorted themselves to match this division? (Sarfati) 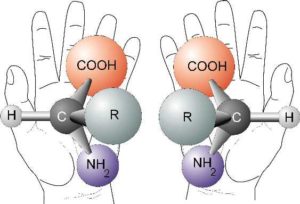 No Prebiotic Soup: The notion of a prebiotic soup was assumed, not demonstrated from the geologic record. Today it is recognized that evidence for this notion is lacking (yet should have been found), and that any such organic molecules would break down as fast as they formed before life began, preventing a concentration of organic molecules from ever developing. (Thaxton, Olsen & Bradley)

Law of Biogenesis: The famous French scientist and skeptic of Darwinism, Louis Pasteur, proved that life comes only from life. Life has never been observed to come from non-life, not even mind-bogglingly rich concentrations of organic molecules such as a sealed can of food. Belief in the origin of life in the past from non-life is thus a violation of one of the fundamental laws of biology, the Law of Biogenesis.

Origin of Life Experiments (Fox/Miller/Urey/etc.): Experiments have never formed “life” from non-life. Even “simple” life is composed of hundreds or thousands of different kinds of proteins, each protein specified by hundreds of amino acids, each of which is composed of a number of atoms. The simple organic molecules formed in these experiments are of trivial complexity by comparison. As Du Nouy realized even a single protein could never be expected by chance. Moreover, rarely mentioned are the low concentrations of simple organic molecules formed by these experiments, the tendency of these molecules to break right back down, and the much, much greater amounts of toxic chemicals that formed which would have completely blocked the formation of life. (Thaxton, Olsen & Bradley)

Oxygen and Ultraviolet Light: Darwinian fundamentalists long assumed the early earth had a “reducing” (that is, oxygen-free) atmosphere, because the presence of oxygen in the air would have interfered with the chemistry of biomolecules. This notion of a reducing atmosphere was also taught as “knowledge” despite the absence of any geological evidence. However, oxygen in the atmosphere is necessary to have an ozone layer (since ozone is oxygen) to block out ultraviolet light. Without it ultraviolet light would have destroyed any organic molecules. This was a catch-22 that remains unresolved. (Thaxton, Olsen & Bradley)

Origin of Life in Space: Given the difficulties of explaining how life could arise on earth some Darwinists suggest it happened somewhere else, and then traveled here. There is no evidence for such a peculiar idea, and many difficulties. Moreover, it does not solve abiogenesis problems, it simply transfers them somewhere else. Astronomer Sir Fred Hoyle and mathematician Dr. Chandra Wickramasinghe note, “If there were a basic principle of matter which somehow drove organic systems toward life, its existence should easily be demonstrable in the laboratory.”

Origin of life research is not enabling Darwinian fundamentalists to propose better and better theories for the origin of life without intelligent design. Instead they are stalemated and following the siren song of biochemical predestination, which only takes them from the frying pan to the fire. The known laws of science, from information science to biology, reveal that information requires an intelligent creator, language even more so. Life comes from life, and ultimately from a self-existent (uncaused) Living Creator with the competence to create life.

Taylor, Ian, In the Minds of Men: Darwin and the New World Order (Toronto: TFE Publishing, 1991).

The speculations in The Origin of Species turned out to be wrong… It is ironic that the scientific facts throw Darwin out, but leave [creationist] William Paley, a figure of fun to the scientific world for more than a century, still in the tournament with a chance of being the ultimate winner…
The likelihood of the spontaneous formation of life from inanimate matter is one to a number with 40,000 noughts after it… It is big enough to bury Darwin and the whole theory of evolution. There was no primeval soup, neither on this planet nor on any other, and if the beginnings of life were not random, they must therefore have been the product of purposeful intelligence. (Hoyle & Wickramasinghe)