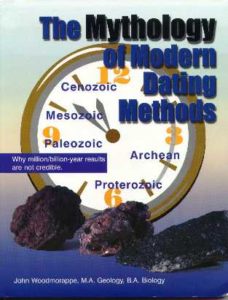 Some people see the global Flood and geologic catastrophes as unconventional science. To others, the work of this Pro-Biblical scholar is a key to understanding Bible mysteries and other secrets of antiquity.

Biography and Testimony of John Woodmorappe:

Life was a challenge for John Woodmorappe from the very beginning. Born in the USA to Polish immigrant parents who had lost everything in World War II, he had to adapt to a new language and culture. Just as the Apostle Paul had a thorn in the flesh, so also did John Woodmorappe. All his life, he has been afflicted with Tourette syndrome. It causes him to have spells of torso rocking and finger-wiggling. Tourette Syndrome is neurological in origin.

Since toddler hood, John has had an insatiable curiosity in scientific matters. At age 10-11, he could identify tens of trees in the neighborhood, and even knew the Latin names of most of them. His friends said he sounded like a priest. An 80-year old retired botanist would visit him, and they would go on walks together to talk about and examine different trees. By junior high, he was going to the state fairs with his science projects. Next, he went to one of the most academically demanding high schools in the whole nation.

Far from being a fundamentalist, John Woodmorappe had not been raised to believe in Scriptural inerrancy in any way. Nothing drove him to unconventional science. He attended a college-preparatory Jesuit school that was liberal theologically as well as politically. There he was taught that Genesis was myth and that organic evolution was a proven fact of science. Not knowing any better, he accepted it.

In his sophomore year, he took an advanced biology course. After organic evolution, John studied ecology, and was taught all the scare-stories of radical environmentalists as proven fact. Having learned that DDT and other organic chlorocarbonsaccumulate in the biosphere because they do not break down, John Woodmorappe wrote his teacher a paper. He suggested that scientists breed bacteria, after subjecting them to radiogenic mutations generation after generation, in progressively greater concentrations of DDT. Finally, we would have a strain of bacteria that not only breaks down DDT but also is dependent on it. When released into the biosphere, these bacteria would consume all the accumulated DDT. The teacher replied that this would probably not work, unless perhaps millions of years were available. This planted the first seed of doubt towards organic evolution in John’s mind, because it showed that the notion of natural selection culminating in unlimited variation is something less than factual.

While a freshman in college, a member of Campus Crusade for Christ won John to the Lord. He eagerly went for follow-up. During one of these sessions, he asked some offhand questions about organic evolution, the global Flood, etc. The Crusade staff man lent him a copy of the GENESIS FLOOD (Whitcomb and Morris 1961). John studied this, and more. John became fascinated at what he saw when first exposed to Creationist research, something that now is referred to as “Creation shock”. This leads to such thoughts as: “Why did no one ever show me this before? I never realized that evolution was so full of holes! I never imagined that there are qualified scientists who question or reject organic evolution. And to think that the global Flood actually took place.”

As earlier in life, John Woodmorappe was intensely curious. He wanted to go deeper. He decided to major in both geology and biology because of the pivotal role of these two disciplines in the study of origins. Then again, he had geology in his blood, as his grandfather had been a geologist who had owned an oil well (at Boryslaw, now in the western Ukraine). He ended up with a BA in Biology, a BA in Geology, and an MA in Geology. Woodmorappe is constantly learning new things on his own, and conducting scientific research. He now has numerous publications, including the following three books:
1: STUDIES IN FLOOD GEOLOGY
2: NOAH’S ARK: A FEASIBILITY STUDY.
3: THE MYTHOLOGY OF MODERN DATING METHODS.

The Studies in Flood Geology book discusses Genesis and geology, and the reality of the global Flood. The descriptive page includes a list of FAQs (frequently-asked-questions) on the Biblical Flood, Genesis and geology, global catastrophes, fossil succession, the young earth, etc.

The Noah’s Ark: A Feasibility Study book examines the logistics of Noah’s Ark, debunking objections and proving, by actual animal keeping techniques, that the Ark was completely workable as an animal-housing unit. The web page that describes the book includes a list of FAQs (frequently-asked-questions) revolving around animal care methods, exotic animals (such as the panda and koala), etc.

The Mythology of Modern Dating Methods book demonstrates the flawed results of isotopic dating, and why none of the radiometric dates in existence should be taken seriously. The descriptive page contains FAQs (frequently asked questions) on isotopic dating systems (radiometric dating): K-Ar, FT, Rb-Sr, Sm-Nd, Lu-Hf, Re-Os, U-Pb, Ar-Ar, etc. The descriptions of all three books contain a list of numerous FAQs (frequently asked questions) based on the contents of each book.

Refutation of attacks on my research supportive of Noah’s Ark.