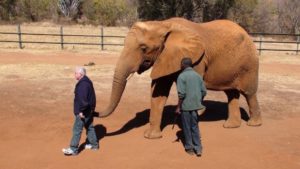 Rich Geer and I joined Dr. Jerry Bergman at the second International Creation Conference held in Johannesburg, South Africa on August 4, 2012. Also speaking at the conference was organizer Dr. Bouke Bokma, Dr. Hennie Mouton, and Koos Van Der Westhuyzen.  Beyond the conference were a series of 16 meetings at churches, Bible Training Colleges and a small group of rocket scientists as well. Meetings were held in Johannesburg, Pretoria and Durban. In Durban, Joshua Gilbert of the Creation Science Information Service organized all of the meetings, and we were busy every day, morning and evening.

The venue was much like the same trip we did in 2005, except Dr. Bouke Bokma hosted us for the majority of the time in Johannesburg. He is constructing Selah Farm, eventually to become a museum and sanctuary for creation conferences and events. This is located to the west of Johannesburg, south of the Magaliesburg Mountains.

Nearby are the Sterkfontein Caves and Maropeng World Heritage Sites. At Sterkfontein, australopithecine fossils have been discovered, including the ones called Mrs. Ples, Littlefoot, and Australopithecus sebida.  Our visits to these sites were an education in evolutionary propaganda. For example, the photograph on the next page typifies the racist progression found in portrayals of ancient men according to the evolutionary paradigm. These are artist renditions, and great liberty has been taken to create the illusion of a sequence between ape and man. But the actual fossil evidence is interesting to creationists because we believe that it fits well within our predictions that apes and men are separate creations. 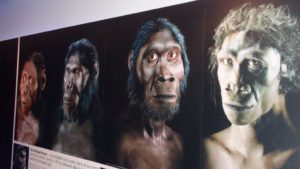 The Littlefoot fossil is of particular interest, since this is the first australopithecine fossil where the foot is found with the fossil. Contrary to popular misconception, these were not “cave men” but they were accidents, fossil apes that happened to fall through a hole in the cave ceiling, died from the fall, and were preserved by fossilization.

Littlefoot’s foot is an ape’s foot with an opposable toe, and that is much different from what is portrayed in the Lucy reconstructions where the feet are human feet, such as what was found in the Laetoli footprints. 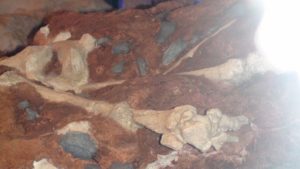 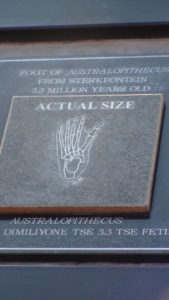 Excavation of the Littlefoot fossil is continuing in the Sterkfontein Caves, and though we agree that it is a significant find, we believe that it is significant in its verification that australopithecines are merely an extinct ape, not on the path to become human.

Creation theory regarding fossil man explains that these fossils can be classified into two camps: varieties of apes and varieties of human. In particular, evolutionists themselves recognize Neanderthal and Cro-Magnon man as human: Homo sapiens.

Creationist believe that, according to the Bible, there was a period of time before Noah’s flood and for several hundred years afterward where humans lived for hundreds of years. Noah himself died at age 950, and he was still alive when Abraham was born, 10 generations later.

According to creationist Jack Cuozzo, an orthodontist, these ancient men would have exhibited facial bone growth typical of elderly people today, and he believes that Neanderthals skulls were merely those of humans who lived for 200 – 500 years.

The Sterkfontein Cave finds are much like finding two or three frames in a movie, and trying to reconstruct the entire movie from them. Creationists believe that all races originated from Adam and Eve, and subsequently Noah, his wife, three sons and their wives. Contained in their genetics was all of the information needed to produce all of the varieties of features found in humans today.

At the end of our tour, our host asked the tour guide if he thought that he had descended from the monkeys and if he had thought about the implications. He indeed agreed with the evolutionary line that was presented in the museum, and a young lady in the tour said that Mitochondrial Eve proved our lineage from the apes and that chimps and humans are 99% alike in their DNA.

I told her that wasn’t true, and that she was working with outdated information. Just the fact that chimps have an extra chromosome refutes that percentage, and that is only with the assumption that the rest of the chromosomes are identical. The human and chimp genome sequences can be compared at the University of California Santa Clara web site, and you can view the fact that the only way they can get the sequences to match is to slice and dice the DNA into small enough segments so that they can be pieced together, either forward or backward from one chromosome to another, on the scaffold of the other genome. Read Dr. Bergman and Dr. Jeffery Tomkins’ articles in Journal of Creation volume 26(1) pages 54 & 94.  First article: Is the human genome nearly identical to chimpanzee–a reassessment of the literature. The second: Genomic monkey business–estimates of nearly identical human-chimp DNA similarity re-evaluated using omitted data.

The idea that human beings are merely another species of monkey should be revolting to every thinking human being. I cannot imagine anything more destructive. If someone actually examines the human and chimp genetic structure, understands how they compare, and then buys the claim that they are 99 or 96% similar, I must question their scientific credibility and religious motivation.

The message at the Sterkfontein Caves directly challenges the Biblical Christian worldview which declares that man was created in the image of God. The ape images displayed at the museum paint a much different picture. 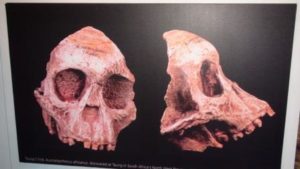 Let us consider a comparison between the evolutionary monkey-to-human beliefs against the Biblical Christian interpretation of the same evidence.

Selected photos of these will be found at http://photos.rae.org.